While entering Executive Class of Shatabdi Express, I was curious to know how the premium sitting section of the train was going to be different from the rest of the compartments. I’m not a frequent train traveller; not a frequent traveller to be honest. For short distances, AC chair car in trains is good and I get my seat booked in such compartments. “Executive class is higher fare, better comfort and better food” that I knew.

I occupied my seat, found it more comfortable than the other classes. Leg-space was more, seats were stylishly cushioned and covered. Satisfied with the ambience, all I wanted was to be served with good food.Quickly and sharply, stewards brought water bottles, a cold beverage and hot tea with Marie biscuits. Sipping tea in the first class AC compartment, I went through the fresh newspaper that was placed on the chair before our arrival.My newspaper coverage was interrupted midway by the service boy.”Do you want cornflakes?”Thinking “This seems to be the ‘Executive Class addition”, I replied, “Yes, please”.A bowl and a packet of cornflakes were placed in a tray. The guy poured some milk in the bowl and I was ready to feast. Another surprise, a banana, also accompanied the pre-breakfast treat. The journey was five and a half hours long and two hours were already over. I began to look into my mailbox on my phone and scrolled through the social media posts while waiting for another round of breakfast;)

“Veg or non-veg?”, the service boy was asking me.
I, under the effect of early waking up and train-swinging, was sleeping like a baby.”Thought it was mentioned in the ticket, I want veg. What are the options?””Veg-Cutlets, Parantha or Dahi-vada!””So many options!” I was surprised as we never get these options in other chair cars. Then remembered I was travelling in the Executive Class:D. I had paid more fare than others, it’s my privilege train ride. Ahem! Ahem!;)Had never tried Paranthas in the train; they don’t serve in all the compartments.
“I want Parantha”, the elite passenger in me replied.A tray with two paranthas, butter, curd, two pieces of bread, sachets of fruit jam, tomato sauce and pickles was placed before me in no time. I clicked and shared the food pictures on social media. This is what they all do, a small contribution from my side will simply add to the craze.How I ate all that stuff in the next twenty minutes is another story;) 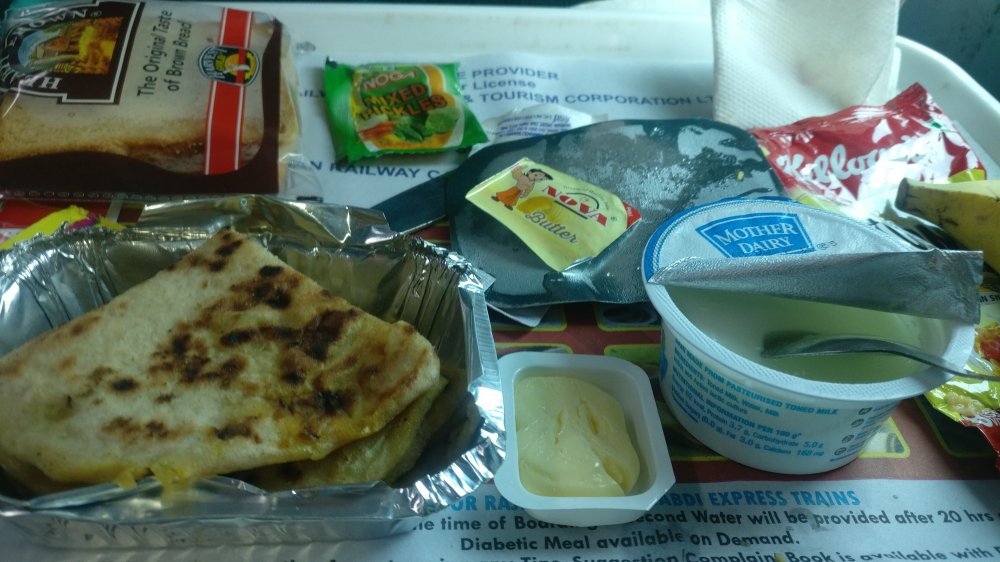 Travelling in the premium class comes with its own pros and cons. They charge you more for a clean, comfortable ride. Food is good, though there’s a possibility of improvement. Now I’m sure about one thing that travel by First Class AC in train is better than many domestic flights.