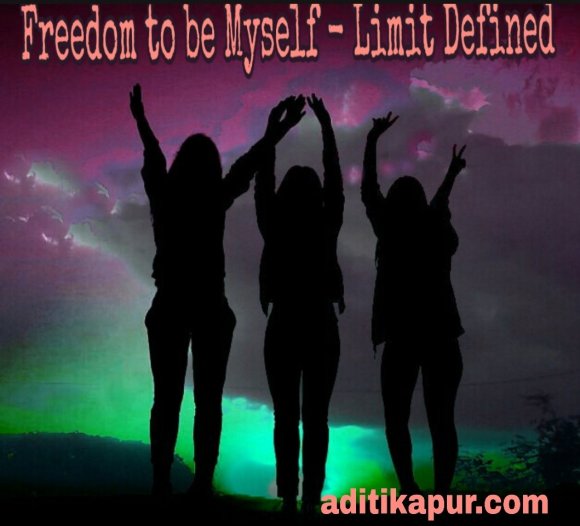 Freedom to be Myself – Limit Defined

“How I wish to be what my heart says. How I dream to fulfil my needs the way I want.
How impatient I am to achieve my goals with the freedom to be me, myself.
It’s my life and I prefer to lead it my way, none of your business.”

Exactly your mind I’m speaking, no?

We want freedom of all sorts. Freedom to live, freedom to express, freedom to follow religious faiths or freedom of press and media. While evolving from slavery, the self-rule thoughts sounded like a comforting relief. Initially, the liberation was the freedom from external interferences that stopped us from doing what we wanted to do. At that stage, the freedom was meant to be the freedom of a country, a society or a large group. Ultimately, it was the freedom to secure society’s existence. Individual interests were not the priority.

As the focus shifts from collective freedom to individual freedom, the areas of conflict become many and shockingly intense! When they’ve nations fighting for freedom, the war is between two huge countries. When they’ve social groups fighting for, say, regional or religious beliefs, the war is between two big groups. It may appear otherwise but the second one is more furious than the first.

The third stage when every individual seeks freedom for himself is NOT as liberating as it sounds. The evolution of humans has placed us at a position where each one gives more importance to himself than behaving unitedly. All thoughts are focused on self. Interests of society and nation are seriously neglected.
All this would have been another phase in the evolution of humans that could proudly form a chapter in the history books. Sadly, this situation is not something to be boasted about. When individual interests are given more importance than those of society, the race is on the verge of collapsing.

Provoking thoughts with these words, I sincerely feel that self-priority is required but not to the extent it clashes with the interests of others. Chase your dreams but rules can be moulded to suit people around you. Believe me, self-centred happiness is short-lived. Ecstasy of togetherness is beyond the limit of words.